The Can-Am Police-Fire Games started as the Northwest Police-Fire Games in 1977.  Officials from two state police and fire games (Washington and Oregon) and a police-fire sports group from Western Canada formed an organization. They organized and conducted a multi-sport event for police officers and firefighters on an annual basis, which continued until 1996.

Through aggressive marketing and tremendous interest from law enforcement and firefighters, the event grew in popularity, so much so that cities large enough to host the event were limited in the northwestern U. S. and Western Canada. The group reorganized and renamed itself the Can-Am Police-Fire Games to better represent the athletes demographically.

To better reflect the broadened scope and nature of eligible competitors, the Can-Am Police-Fire Games Federation expanded its mission statement to represent police, fire services, emergency responders and protective services. This demonstrates the commitment to include other age such agencies like the Emergency Medical Service Providers, Homeland Security, Border Patrol, and Corrections Officers; just to name a few.

Host city selections are made through a bid process up to five years in advance of planned Games. This allows a future host the opportunity to experience at least two Games events in order to prepare for their own. The size of the Games is only limited by a community’s efforts to market them with the help of the Can-Am Police-Fire Games Federation. 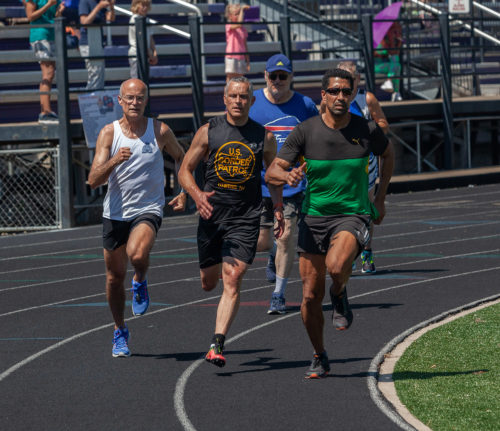 CAN-AM BOARD OF DIRECTORS

Bill Merrylees is a Detective Superintendent with the London Police Service in London, Ontario, Canada and has 34 years of experience. He is presently the Commander of the Criminal Investigation Division and is a graduate of the FBI National Academy.

Bill has competed in the games since 2000, winning medals in Golf, Softball, 5k and 10k Cross Country, 10k and 21k Run. He was the Chair of the Sport Technical Committee for the 2004 London Can-Am Police-Fire Games which had 876 competitors in 46 events at 37 venue sites. Bill was appointed to the Board in March 2005 and became the CEO in 2010.

Terry joined the Royal Canadian Mounted Police (RCMP) in May 24, 1974 and is presently retired and living in Regina, Saskatchewan. Terry has actively participated in Police and Fire Games since 1985. Terry was Director of Sports during the 1998 Can-Am Police-Fire Games in Regina and became a member of the Federation Board of Directors. Previous assignments with the RCMP include General Police Duties, Isolated Post Duties, Special Duties (Olympics), General Investigation Section, Federal Enforcement Section and Drug Enforcement.

Kevin is a retired Battalion Chief with the Lewiston Fire Department in Lewiston, Idaho and has 26 years of experience. He was appointed to the board in 1993 and had recently returned after a short leave of absence. Kevin has participated in the games since 1988, competing in Toughest Competitor Alive (TCA), Toughest Firefighter Alive (TFA), Track and Field, Basketball, Triathlon and Waterskiing.

Lynn is a retired Lt. Colonel with the Oregon State Police and lives in Salem, Oregon. He was appointed to the Board in 1987, after hosting the ’87 Games in Salem, and elected Vice-President in 1988. When the Board was restructured, he was elected as the U.S. President and appointed as Treasurer. Lynn is presently retired from the RCMP Training Academy NCO I/c Fitness and Lifestyle Unit.

Gary is a retired Staff Sergeant with the Calgary Police Service and has eight years prior service with the Royal Canadian Mounted Police (RCMP). He was appointed to the board in 1990 and elected Canadian President in 1993. Gary served as Director for the 1993 Games in Calgary and was the Executive Director of Sports for the 1997 World Police and Fire Games in Calgary. In 1999 he attended the World Police and Fire Games in Stockholm, Sweden as a competitor and also the Chief Referee of the P.P.C. Shooting competition.

Since retiring in 1998 Gary continues to get enjoyment and satisfaction from devoting time to the Can-Am Police-Fire Games.

Darryl is retired after 27 years with the Correctional Service of Canada, where he worked his first 15 years with security in a Federal Prison and transitioned to an Aboriginal Liaison Officer for the remaining 12 years of his career, taking groups of offenders into the community to volunteer their time and skills with various non-profit labour tasks. Darryl has competed since 1993 in the Northwest Police and Fire Games, Can-Am Games, World Police and Fire Games and United States Championships. He enjoys competing in the Toughest Competitor Alive competition and hopes to do so for years to come.